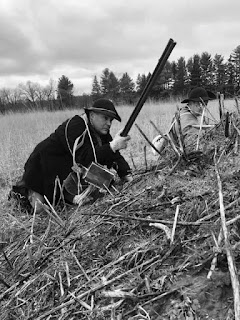 
The 2021 SOTR Event, Defending the Backcountry; Fort Frederick, Rangers & the Seven Years War, will be conducted as a 48-hour immersive interpretive event & tactical.  Participants will be assigned to a 30 man Ranging Company tasked with unique patrol objectives.    Each patrol will have a main objective, as well as several tactical and fieldcraft skill taskings to complete, while under constant threat of a dedicated Opposition Force.  In addition the 2021 event will feature significant civilian interaction with Fort Frederick’s kitchen, hospital and laundry staffed and interpreted.

Participants will experience a glimpse of barracks life “under military orders,”  including the joys of issued provisions & bunk assignments, as well as being ordered out on fatigue duties and reconnoitering parties.  Predominantly the weekend will consist of ranging on foot across broken terrain in inclement weather utilizing only 18th C  appropriate gear.  Participants  should expect to experience fatigue, hunger  and the effects of weather..

What was a reconnoitering party?
The reconnoitering party was used; “to distress the French and their allies, by sacking, burning, and destroying their houses, barns, barracks, canoes, battoes, &c. and by killing their cattle of every kind; and at all times to endeavour to way-lay, attack, and destroy their convoys of provisions by land and water, in any part of the country...”  By mid century, reconnoitering parties  or “ranging” had developed into its own military specialization recognized by the British establishment. It was the tactics and techniques of partisan warfare optimized for the forest.

Who conducted Reconnoitering Parties ?
During the 18th C conflicts in North America, make-shift detachment of Provincials and militia often attempted this role.  At times it was British Soldiers & officers. The British Reconnoitering specialization came to be known as Ranging.  Originally Native allies were heavily depended on. Later as combined arms strategies evolved, Light Infantry units preformed much of this function.

But Rangers were the specialists that developed the craft needed to survive the crucible of Total War in the North American forests. By integrating woodmanship skills, and Native American techniques with British organizational command and control structures, rangers honed irregular warfare practices that are largely followed today.   This event will focus on the Rangers in and around Fort Frederick during the Seven Years War

Who's invited?
Registration is limited to 30 ranger participants portraying those that “ranged” in and around Fort Frederick during the Seven Years War.  Participants must meet the minimum equipment guidelines.    Opposition Force & Fort Frederick civilians roles are extremely limited.

What to expect?
Participants should expect to spend the entire Event in the elements & in primitive barracks conditions field testing their kit  and conducting immersive patrols, duties and recreational activities  regardless of weather conditions.

Cost /Fees?
The registration fee is a $50.00 tax deductible donation that covers attendance  as well as the pre event online curriculum & discussion.  Because of Covid Uncertainties, we are accepting a non refundable $20 donation to hold a slot with the remainder due prior to January.  IF Covid Restrictions continue through March, the event will be cancelled for 2021.

How do I participate?
For a registration packet email: registration@schooloftheranger.com

New comments are not allowed.