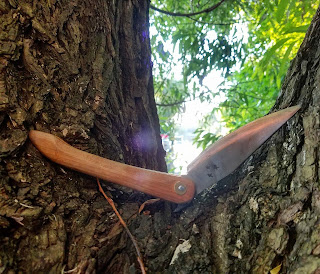 Our next featured sponsor is De Messenmaker, the Traverse City, Michigan based knife maker that specializes in 17th and 18th C cutlery.

De Messenmaker has generously donated a Samois style folder for our charity auction. These folders were common French trade good items throughout the century, and became so popular they were eventually imported by British traders and copied by manufacturers in England.

An excellent overview of this style knife can be found in the article "French Knives in North America: Part 2" by Kevin Gladysz and Ken Hamilton,  in the Oct / Nov 2011 issue of Journal of the Early Americas.

Prize Raffle rules and details can be found at the "Prize Raffle" link above.