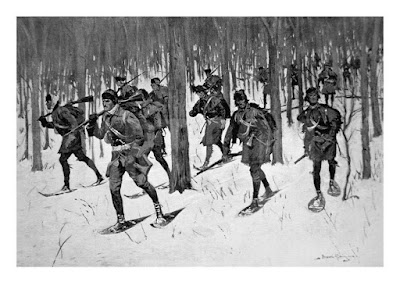 January 15, 1757. Agreeable to orders from the commanding officer at Fort Edward, I this day marched with my own Lieutenant Mr. Stark, Ensign Page of Captain Richard Roger's company, and fifty privates of said companies, to Fort William Henry, where we were employed in providing provisions, snow-shoes, &c, till the 17th, when being joined by Captain Spikeman, Lieutenant Kennedy and Ensign Brewer of his company, and fourteen of their men, together with Ensign James Rogers and fourteen men of Captain Hobbs's company, .....  we began our march on the ice down Lake George, and at night encamped on the east-side of the First Narrows ... The 19th we marched three miles from our encampment further down the lake, and then took the land, and, upon snow-shoes, travelled northwest about eight miles from our landing, and three from the lake, where we encamped.

-Excerpts from the Journals of Major Robert Rogers.

Our soldiers make great progress in walking on snow-shoes, but men, not accustomed to them, find them very fatiguing. These inventions are made of hoops of hickery, or other tough wood, bended to a particular form, round before ; and the two extremities of the hoop terminate in a point behind, secured well together with strong twine ; the inward space is worked, like close netting, with cat-gut, or the dried entrails of other animals. Each racket is from three quarters to one yard in length. At the broadest part, which is about the center, where it is fastened by thongs and straps to the person's foot, it is about fourteen, fifteen, or sixteen inches ; a light lively man does not: require them so large as he who is more corpulent and less active ; the hard-soled shoe is not at all suitable to them ; they must be used under mogosans, as well, for the sake of the wearer's feet, to keep them warm and preserve them from the snow, as that they will not bind on so well, nor be so soon worn out. The uncouth attitude, in which men are obliged to walk, is what renders them laborious the body must incline forward, the knees bend, ancles and instep remain stiff as if the joints in those parts were completely ossified, and the feet at a great distance asunder; by this description, which is the best I can give, the reader may form to himself a lively idea of the snow-ssioes, or snow-rackets, so fre quently mentioned in the course of this Journal...

- John Knox, December 1759, A Historical Journal of the Campaigns in North America, vol 2

"RACKET is also a kind of snow shoe, or machine, which the savages of Canada bind to their feet, to enable them to walk more commodiously on the snow; made much in the manner of a tennis-racket. Its figure is a lozenge, of which the two obtuse angles are turned off. It is bound about with very fine thongs of leather, the mashes of which are much smaller and closer than those of our rackets. In the middle is fitted a kind of shoe lined with wool or hair, to be tied on to the ancle [sic]."

- A New and Complete Dictionary of Arts and Sciences; Comprehending All the Branches of Useful Knowledge", 2nd Edition, Volume IV, A Society of Gentlemen, 1764

After struggling thro' the snow some hours, we were obliged to halt to make snow shoes, as Mr. and the guide had left theirs at arriving upon the ice. Here we remained all night, without any blankets, no coat, and but a single waistcoat each, for I gave one of mine to Mr. , who had laid aside his green jacket in the field, as I did likewise my furred cap, which became a mark to the enemy, and probably was the cause of a slight round in my face ; so that I had but a silk handkerchief on my head, and our fire could not be large, as we had nothing to cut wood with. Before morning we contrived, with forked sticks and strings of leather, a sort of snow shoes to prevent sinking entirely; and on the 15th, followed our guide west all day,....

Snowshoes, along with ice skates and ice creepers were indispensable equipment for northern ranging during the 18th C.    For more information, see this 18th Century Material Culture Resource Center link , or this interesting article on Snowshoes in New France.      The above image is The March of Roger's Rangers by Frederick Remington (1896).