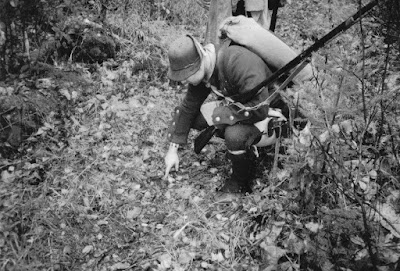 The Indians discover our parties by the track of their shoes. It would be a good thing to have shoe-packs or moccasins for the scouts.

We came now upon the tracks of Mohgasaons, and also of some horses, which it was evident, by the snow or sleet - that had fallen this morning, were quite new; whereupon we quickened our pace...


...On going over mossy or soft ground, we change our position & march abreast of each other to prevent an Enemy from tracking us, as they would do, if we kept in a Single File, till we get over it, and then resume our former Order of travelling till it’s quite dark before we encamp;

A Scouting Party of my Militia consisting of a Lieutt & 12 excellent Woodsmen, all disquised like Indians, went out last Monday in quest of Kickiuskum & three or four others of his Gang, and return’d yesterday, but were not So fortunate as the time before; they upwards of 40 miles from this, but could discover no Indians, tho’ they went to their Cabbins, & tracked them to the Place where they had made their Canoes & embarked.


Tracking was the critical skill rangers used to detect and subsequently ambush or avoid the French & allied Natives during their primary mission tasking as independent raid or reconnoitering parties.  Tracking was also critical to the success of their secondary roles as advance or security elements for larger regular forces transiting the North American Forest.

Sources such as Rogers, Knox, Bouquet, and many others document the systemic use of tracking as an integral component to scouting missions. Collectively these accounts demonstrate the regular use of sign detection, interpretation and aging by scouts, as well as the sophisticated tactical application of tracking among many ranging parties.

Join us as we examine the role of tracking in 18th C irregular warfare, and its relationship to other skills in the ranging process.

Posted by School of the Ranger at 3:01 PM