Old Sines, Skouts & the Role of Tracking Part I 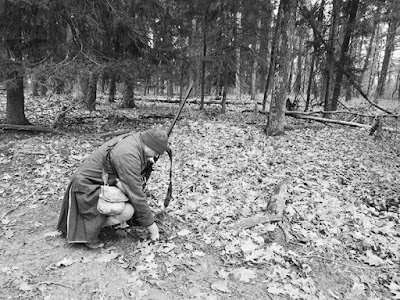 we traveld 12 milds up pemichewashet River and found old sines of indens and we sent out skouts that night and found one new track and we lay that night by the river and made new camps. The Land that lys by this river is vere rich and good and the upland vere full of hils and mountains, very bad traveling.


15th we lay still & sent out scouts. 16th, we travelled 6 miles, & came upon the tracks of Indians, & we left 16 men with our packs, & the rest pursued the tracks till dark that night, and staid there all night, and on the 17th we followed their tracks till about 8 o clock, & then we found where the Indians had lain twenty-four hours be fore, & we having no victuals, returned again to the 16 men we had left our packs with, & refreshed ourselves, & then we all pursued the remaining part of that day, & the night ensuing, 6 miles.Feb. 18th, we travelled 20 miles & encamped at a great pond upon Saco River. 19th, we travelled 22 miles & encamped at a pond.  20th, we travelled about 5 miles, & came upon a wigwam that the Indians had lately gone from, & then we pursued their tracks 2 miles further, & discovered their smokes, and there tarried till about 2 o clock in the morning, & then came upon their wigwams & killed ten .Indian men, which were all that there were there, & not one escaped alive.


When they fear being discover'd, or follow'd by an Enemy in their Marches; they, every Morning, having first agreed where they shall rendezvouz at Night, disperse themselves into the Woods, and each takes a several Way, that so, the Grass or Leaves being but singly prest, may rise again, and not betray them. For the Indians are very artful in following a Track, even where the Impressions are not visible to other People, especially if they have any Advantage from the Looseness of the Earth, from the Stiffness of the Grass, or the stirring of the Leaves, which in the Winter Season lye very thick upon the Ground; and likewise afterwards, if they do not happen to be burned.

Late 17th and early 18th C sources document the use of tracking in the cycle of limited, retaliatory skirmishes that commonly occurred in North America prior to the French & Indian War. Though not a standardized discipline, souces such as Church, Lovewell, White and others provide enough detail to discern the tactical application of the skill set among the Natives and the colonial woodsmen tasked with tracking them down.

Part II will touch upon the further militarization of tracking and it's role in reconoitering during the F&I War.

Posted by School of the Ranger at 3:26 PM