A Band of Rugged Foresters... 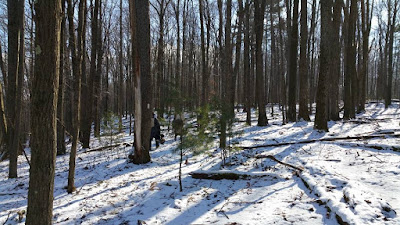 Captain Rogers, possessing a bold and adventurous spirit, soon mustered a band of rugged foresters, every man of whom, as a hunter, could hit the size of a dollar at a hundred yards distance; could follow the trail of man or beast; endure the fatigues of long marches, the pangs of hunger, and the colds of winter nights, often passed without fire, shelter, or covering, other than their common clothing, a blanket, perhaps a bearskin, and the boughs of the pine or hemlock.
-Memoir and Official Correspondence of General John Stark.


A Scouting Party of my Militia consisting of a Lieutt & 12 excellent Woodsmen, all disquised like Indians….
- Ourry to Amherst: Fort Bedford, June 10, 1763.  Bouquet, Vol. IV.


My orders were to inlist none but such as were used to travelling and hunting...

...nor any but what are able-bodied, well acquainted with the woods, used to hunting, and every way qualified for the Rangeing service...
- Excerpts from different sets of recruiting instructions recorded in Rogers' Journal

I do promise and engage to all good Woodsmen, &c. who will enter into the Service of their Country now, for a month or longer; if they will subject themselves to Military discipline, for the time they engage and undertake to do Soldiers Duty, and obey my Orders; That they shall receive Soldiers' pay, ammunition and Provision; and be discharged at the time agreed on.

Woodsmanship was the foundational skill set of ranging, but tactics and techniques had to be developed to counter an equally skilled adversary.  School of the Ranger participants will explore this adapatation of woodsmanship into partisan tactics & techniques through a guided analysis of numerous period sources online, and via immersive training excercise during the event.  For more information select the Event tab above.
Posted by School of the Ranger at 2:08 PM